Driving The Future of Vehicle Development

It’s rare that we at Average Joes get to attend events on our doorstep. Most of the time we have to get up very early, dose-up on coffee and drive halfway across the country. Not this time though. Here in Norfolk there is company you’ve probably never heard of, making very cool things indeed. This company is called Ansible Motion and they make driving simulators. 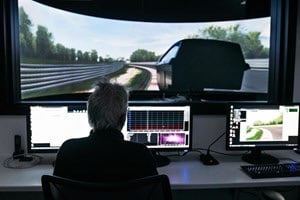 Prior to today I had two different experiences of driving simulators. The first is the most obvious, games such as Gran Turismo and Forza Motorsport are often referred to as driving simulators but are still somewhat arcade-like. The other was at a race team HQ, a simulator they use to allow their drivers to get used to track layouts and hone their lap times. Until today, the latter was the closest I have got to real driving without actually stepping foot into a real car.

I must admit I had preconceived ideas about what Ansible Motion’s Simulators were used for. I assumed they were simply a more advanced version of the simulator for vehicle development I drove last year. As it turns out, I was quite wrong.

Read the full story on the Average Joes Website