Article by: Matt Prior Editor-at-large, Autocar

I think the first time I used a car simulator that felt half-realistic was at McLaren, when it was developing the MP4-12C [road car], in 2011...  Back then, using a simulator was still a novelty for a lot of car makers. Today, hardly any would be without one. Or two. Or more. They save time, they save money and, fundamentally, they make race and road cars better. Or at least they should do...

I sense that, in the simulated world, much of the eight years since have been spent reducing the difference [between what happens in the sim lab compared to what happens in the real car]. The key to a great ‘driver in the loop’ (as in, a person is using it) simulation is that it feels like the real thing. And while the physics get more accurate still, and more advanced software lets engineers model ever more factors, the best sims are ones that make you feel like you’re actually there.

And herein lies the problem. The earliest simulator that I, and perhaps you, saw was for aeroplanes. It was on The Krypton Factor (ask your parents) and it was in a pod, as flight simulators often still are. They sit on a ‘hexapod’, an arrangement of rams that gives plenty of degrees of movement, but, usually hydraulically powered, they’re slow to respond and, other than giving you an angle of lean, can’t maintain a g-force...

Those are the challenges. I’ve been to a couple of places that think they’re at the cutting edge of the answer, and both are in the UK...

[The first, the Cranfield Simulation simulator] works brilliantly for driving on track. They combine [their core g-seat technology] with other technology, too, such as high-frequency movements to replicate kerb hopping or eye position changes (if you’re braking hard in real life, you slip in the seat and your view changes), a ‘yaw platform’ that gives cues to stepping over the limit and a suspension platform that pitches, rolls and heaves. I was hooked.

Ansible Motion, based at the Hethel Engineering Centre round the corner from Lotus, is arguably even more advanced. As with Cranfield’s, you can pick and choose from a small limited-movement simulator to an all-singing, all-dancing one, but Ansible’s sings and dances like nobody else’s. Its range-topping Delta-series simulators have up to 13 axes of motion – the primary six (surge, sway, yaw, heave, pitch, roll, if you’re counting) and then others up to and including helmet loads. And they’re servo operated, not hydraulic. Trouble is, high secrecy and confidentiality mean nobody likes to say who the firm sells its simulators to.

Until you walk into the Ford Performance Technical Center in North Carolina, which develops Ford’s racing cars, where they have two [simulators], in two massive rooms. Mostly, they’re used for racing, in everything from concept development through to having two Nascar drivers on the same oval. Who makes the simulators? “Ansible Motion,” says Ford Performance’s director, Mark Rushbrook. 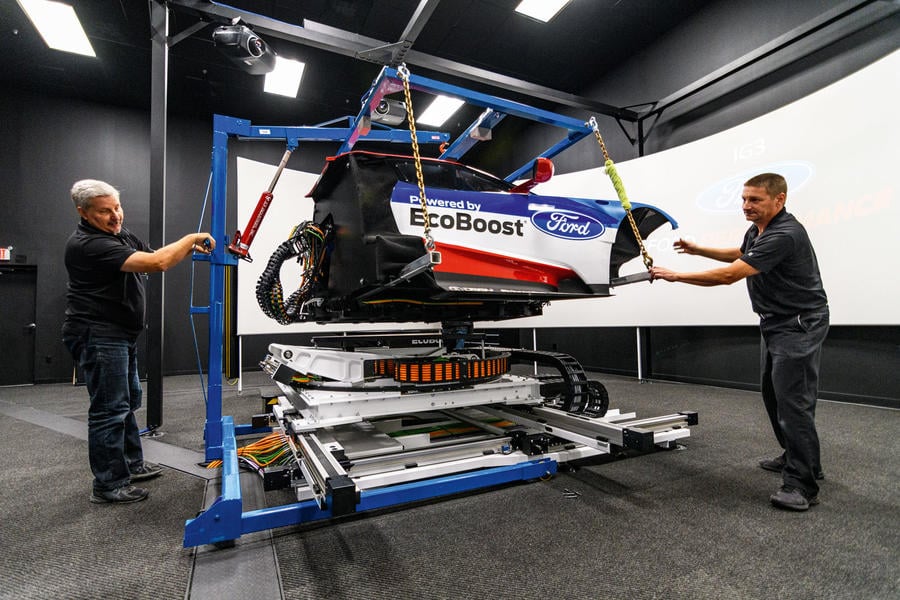 They’re in use all the time. “We thought one was enough,” says Rushbrook. “Then we thought two was enough. And now the product guys are in there all the time, too, so maybe we need a third.”

For road car products, the simulator is easily as useful as it is for racing. Sims are expensive. Nobody will say exactly, but let’s call it a couple of million quid for a good one. But if you can make one less prototype and save £15m, it’s worth every penny.