Looking down the road: Harnessing the benefits of driving simulator technology

This eBook provides an overview of driving simulator technology and its use by automotive constructors.

Read the eBook below on this page, or download it as a free PDF: 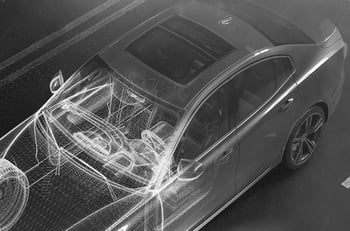 Simulation, in one form or another, has been part of the vehicle design and development process since the earliest days of the automotive industry. Fundamentally, simulation means using mathematical models and computational methods to assist the design and development of real components and systems. For instance, numerical models of mass-spring-damper systems can be used to calculate certain suspension and ride characteristics that can inform vehicle tuning decisions. Modelling predictions become trusted once they are validated by physical measurements and when variable changes are proven to align with measured and subjective assessments of the same.

This traditional process that is called simulation – which is really the blending of off-line computer modelling with real-world measurements and subjective evaluations – has benefitted in recent decades from increasingly sophisticated modelling methods and computational horsepower. These days, simulation has earned a new name in automotive space: digital product development.

This is more than just a shift in terminology. It is a shift in how automotive manufacturers are harnessing simulation technologies in order to bring their increasingly complex products to market more quickly and with higher quality, while simultaneously reducing development costs. How is this done?

This can be achieved when digital product development tools and techniques enable the exploration of new concepts earlier and more often in the vehicle development process. One example is Driver-in-the-Loop (DIL) simulation, which allows real people to participate in virtual test drives so they can safely and efficiently evaluate tomorrow's vehicles today, and do so before any metal is cut.

In this paper, we’ll focus our attention on DIL simulators and their usefulness as automotive digital product development tools. In order to do this, we’ll present how DIL simulators’ ability to connect real people with real and imagined hardware provides new opportunities and cost savings for vehicle manufacturers; we’ll describe some of the fundamental characteristics and types of DIL simulators; and we’ll even provide a driving simulator checklist to help engineers, technical directors, programme managers and other automotive professionals assess and compare currently available DIL simulation technologies.

Cars are ultimately consumer products that must gain acceptance in the marketplace, so there are virtually no aspects of vehicle design where human interaction doesn’t play a part. Subjective observations on comfort, refinement, operation and dynamics are required to help to define the user experience of any vehicle.

The influence of human behaviour on vehicles also extends beyond the obvious. This has become increasingly the case for modern vehicles due to the technological advancements that are being introduced across all product lines. For example, autonomous (self-driving) cars need to be able to react to a full range of human behaviours that might be encountered, and these extend beyond piloting actions. Likewise, advanced driver assistance systems (ADAS) need to be calibrated against human behaviours so they do not inadvertently prompt or introduce conflicting inputs that could reduce overall safety.

When it comes to designing and developing automobiles, off-line simulations of all types have proved themselves to be indispensable. Off-line simulation tools have also become increasingly sophisticated over the years – in effect, keeping pace with the increasing complexity of vehicles themselves. However, off-line tools do not capture the human interaction that plays such a crucial role in automotive product development.

Driver-in-the-Loop (DIL) simulators have evolved to help fill this void between off-line simulations and real-world assessments. By allowing a real person to “close the loop” and thus be directly involved in what would otherwise be an off-line vehicle simulation, a DIL simulator is effectively a way to create a direct connection between a human being and a simulated vehicle experience.

If the connection is convincing, we have the basis for a useful tool for delivering insights that simply would not be possible otherwise. Armed with this capability, vehicle manufacturers can make informed and impactful decisions earlier and more often in the development process. In the automotive development arena, impactful means something that improves quality, reduces costs or reduces time-to-market. Hopefully all three are achieved.

The aim of DIL simulation is to provide an accessible environment that allows real people (and potentially AI systems) to interact with virtual vehicles in virtual worlds. Vehicle manufacturers make use of DIL simulation before physical prototypes are built and also concurrently with prototype testing, as an efficient way to accumulate more test miles. As John Wilkinson, Lead Performance Engineer at General Motors explains,

"Driver-in-the-Loop simulation proved to be an efficient process for cycling people … through multiple rounds of virtual prototypes … and immerse them in a simulation that has all the elements … of a real car."

When DIL simulation is included in advance of physical prototype construction, engineers can evaluate new concepts at the earliest stages. This gives them more freedom to consider novel solutions that would perhaps be deemed too time consuming or too expensive to investigate with conventional methods.

When DIL simulation is included concurrently with prototype vehicle testing, there are advantages as well. For a start, early prototypes are often test mules adapted from previous generation vehicles or similar platforms, which means they may be less representative than an updated digital vehicle model. In addition, the cost to build a prototype vehicle is not insignificant. And there is also the cost attached to testing it. One North American OEM noted that each trip to the Nürburgring Nordschleife in Germany costs them roughly $200,000 (USD), while they can drive a digital prototype of the same vehicle on a highly accurate virtual model of the same track without leaving their own facility.

On the whole, reducing the time and cost of vehicle testing can have a profound effect on development budgets. One automotive OEM noted that simulator testing has made it possible to halve its time to market and reduce the number of physical prototypes by 40 percent.

The notion of a DIL simulator creating a compelling, immersive connection is an important one. Driving along a real road, for instance, we might see vehicles or landmarks that are hundreds of metres away, whereas the screens used to display the equivalent image in a simulator need to fit inside the confines of a room. Likewise, there simply isn’t the space available indoors to replicate most manoeuvres with a 1:1 motion ratio.

By definition, the job of a DIL simulator is to convince human participants that they are experiencing certain sensory inputs without having to reproduce them exactly as they would be in real life. There is a subtle but important concept to identify here.

This concept is known as cueing. In order to prompt the same responses from a human participant as a real vehicle would do, a simulator must present a convincing case to specific human sensory systems, including haptic, vestibular, optical and auditory systems. Any perceptible mismatch in sensory cues will lead to an inauthentic experience at best, and potentially debilitating nausea at worst, so it’s vital that the cues delivered by a DIL simulator all work together in harmony, especially when motion is included.

Aside from the DIL simulation participant, there is at least one other person to consider: the DIL simulator’s operator. In addition to being accurate and immersive enough to prompt representative sensory responses from the participant, a DIL simulator also needs to provide complete control over test scenarios and conditions. This means that an operator should be able to modify all modelled vehicle and environmental parameters, allowing different experiments to be staged and executed back-to-back. The ability to extract meaningful data from the virtual vehicle, the virtual world space and the human participant(s) is key to a simulator’s successful utilisation.

Automotive DIL simulators range in size, complexity, capability and cost. They can be broadly classified into three basic categories:

These are primarily consumer-class simulators that are powered by gaming PCs or consoles, with relatively basic driver controls (typically a steering wheel, gear selector and pedals). There are some larger, commercial systems used for amusement parks, trade shows and other events, which may feature mock-up vehicle cabins, motion systems and audio systems.

The graphics can be state-of-the-art in terms of quality and photo-realism. As such, it’s not unusual to see these DIL simulators being used by amateur and professional drivers who wish to practice driving on realistic race tracks. However, this class of DIL simulator generally lacks the vehicle physics and environment modelling fidelity for engineering or product development work.

These DIL simulators are designed to replicate the driving environment of a vehicle more closely and more comprehensively. They may include real or replica cabin, for instance, with fully functioning dashboards and interfaces. Outside the immediate participant surroundings, one may find large scale motion and vision hardware, similar in appearance to an aircraft simulator.

Although some Human Factors DIL simulators feature some level of motion cueing, this is not generally a priority outside including some baseline movement. Likewise, the graphics technologies tend to prioritise the flexibility to modify and adapt scenarios over photo-realism or ultra-low latency.

Despite these limitations, the potential for road safety research alone can justify enormous investments in Human Factors DIL simulator installations. Some high-profile installations can take up entire rooms, and capital costs can spill into the hundreds of millions of dollars. One example is the $49 million (USD) spent to construct NHTSA’s National Advanced Driving Simulator project.

Human factors DIL simulators can play an important role for automotive manufacturers. In some cases, experiments can be conducted with Software-in-the-Loop (SIL) models or real hardware, such as engine control units, in place via Hardware-in-the-Loop (HIL). However, the limited dynamic performance of human factors DIL simulators (often compounded by the sheer size and mass of the hardware involved) means that they aren’t generally suitable for subjective evaluations of vehicle performance.

Engineering-class driving simulators deliver compelling driver immersion via high performance motion and vision systems, as well as comprehensive tool suites. These DIL simulators typically have medium-size form factors, and are directed towards satisfying the needs of professional drivers and engineers.

As such, greater emphasis is placed on factors such as motion cueing, tyre and surface modelling and supplemental cueing such as steering wheel feedback. The simulators themselves are designed as lightweight machines with medium scale form factors to maximise their dynamic capabilities. In some cases, real vehicle cabin components are included to create a more immersive experience rather than for ergonomic reasons. They are also frequently connected in real-time to sophisticated vehicle sub-system models via SIL or HIL test benches.

Driver-in-the-Loop simulators can be sourced or configured differently depending on application, specific areas of interest and budget. Since there can be quite a bit to consider when on-boarding this technology, the following checklist is offered to assist with your engineering-class DIL simulator selection process.

Traditional automotive simulation is changing. Automotive manufacturers are now engaged in digital product development. This is in keeping with their need to bring increasingly complex products to market more quickly and with higher quality, while simultaneously reducing development costs.

Driver-in-the-Loop (DIL) simulation can make a huge contribution to the vehicle development process because they fill a void between legacy off-line simulations and necessary real-world assessments. Because DIL simulators create direct connections between real people and simulated vehicles, vehicle manufacturers can make informed and impactful decisions earlier and more often in the development process, leading to improved quality, reduced costs and reduced time-to-market.

Automotive DIL simulators are engineered systems that can be sourced and configured for many different applications. Careful vetting of potential suppliers and their offerings is an essential step in selecting the right DIL simulator for your team.