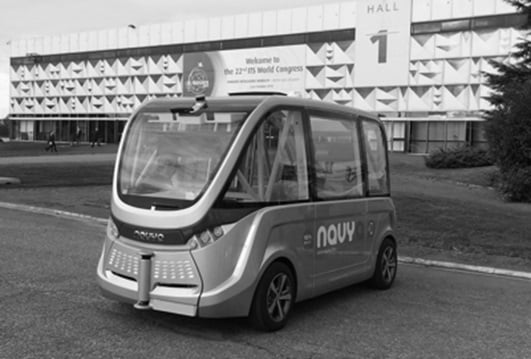 I time traveled last week and I have returned to describe the wonders of the future. My time machine was not a DeLorean (as in the Back to the Future film series), it was an autonomous, electrically powered pod, a silver and blue device that hummed along calmly, and deposited me at earth coordinates 44°53'31.6"N 0°33'58.4"W, the doorstep of the Intelligent Transport Systems (ITS) World Congress. I’m not sure in what year I landed. I would guess 2020 or thereabouts. I did not time travel alone. There were many others.

The Philosophy of Information

I was invited into the future to participate in a panel discussion about automotive simulation and modeling. Most of us on the panel were from the year 2015, where we work with driving simulator technology that aims to connect individual people with simulated vehicles and environments. Most of the audience members worked there in 2020 with technology that aims to connect vehicles with the Internet of Things (IoT). A meeting of two worlds it was. We did our best to communicate with each other, share ideas, and I think we had a positive exchange.

When I was asked to stand and talk a bit, I offered up the following perspective: The writer, Isaac Asimov, once said that, historically speaking, there are three identifiable stages in published science fiction:

When Asimov said this – in the midst of the late 1960s “space race,” if I’m not mistaken – he claimed that his own writing and the writing of his peers had already transitioned into the third stage. One might assume that in saying this, he was respectfully nudging society as a whole to catch up with the artists, so to speak, to adopt a concern for humanity during its relentless march forward.

I am curious about the future, so I asked the audience members, as representatives of the future, which stage they thought they were in. The answers varied.

There is excellent food and wine in the future, and lots of it. I sampled a number of bite-sized, geometric delights, and found them all to be wonderful. Little squares and triangles stuffed with who-knows-what. In the future, food and wine fuel socialization and conversation, just as they do now. I spoke to so many interesting people about so many interesting things.

An extremely intelligent woman wearing a crisp blue business suit and white gloves enlightened me about future advanced traffic management solutions. I asked a thousand questions about this, and she politely explained it all to me. In brief, connected cars will be detected, identified, and managed by supervisory entities. Location and traveler information services will determine optimum routes based on pre-determined requirements such as recharging lane availability (the batteries of electric cars will be recharged by driving over designated lanes), and emergency service detour mapping.   Taxes and tolls will, necessarily, be managed by satellites. This will begin with commercial trucking fleets, thus re-inventing the distribution of all goods, and then it will spill over into passenger vehicles. I feel much smarter now. And I’m glad to see that gloves will be coming back.

One gentleman had performed extensive studies on Advanced Driver Assistance Systems (ADAS), and found that certain systems are more likely to encourage undesirable driver behaviors than others. As an example, he described how “super-human sensory systems” such as Blind Spot Detection (BSD) might actually cause drivers to become too dependent upon them, and feel empowered to engage in more risky driving, whereas drivers are less likely to be lulled by mere “sensory assist systems.” Fascinating. I seized the opportunity to inject the notion that engineering class Driver-in-the-Loop simulators are perfect tools to study such things since they can put real people into dangerous ‘virtual’ situations instead of real ones. This is what I do.

This is only the tip of the iceberg, of course. The future of cars and transportation holds many wonders. Here is what I find interesting: The implications of technical innovation are never fully understood. Willis Carrier never could have imagined in 1902 that his invention of air conditioning (meant to keep ink from smearing in a small printing press room) would lead to the redistribution of human population on the planet. With this in mind, what wheels might we be setting into motion now, here in 2015?

To learn more about how advanced technologies such as Driver-in-the-Loop simulation are shaping the development of vehicle and transportation systems, download our FREE white paper, “Look Down the Road: Driving Simulator Technology & How Automotive Manufacturers will Benefit”.