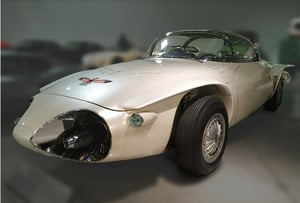 Since most of the technology conceptualization related to driver-less cars took place more than sixty years ago(!), we might logically ask the following: What’s all the fuss about nowadays?

Is it simply the maturation of certain technologies that is now pushing autonomous cars to the forefront of our thought space?  Or are there other forces at work, such as cultural and economic shifts?

Watching historical films like the one below can inspire mixed feelings [Note: this film is ~9 minutes in length.]  On one hand, the optimism is palpable, inspiring, and it's good to know that automobile manufacturers have been studying AV technologies for such a long time.  On the other hand, this is a pointed reminder that there’s a fair amount of folly in many technical innovations.  Any snickering at the kitsch aspects invites introspection: How will our own ‘cutting-edge innovations’ be viewed sixty years from now?  Or even ten.

Historically speaking, when new technologies are actually implemented, after graduating from the concept stage, there are usually some unexpected consequences.  Some are desirable, some are not.  To wit: Alfred Nobel invented dynamite in 1867 for civil construction purposes, never imagining that it might be used to increase the lethality of weapons of warfare.  The unexpected occurs because people are, well…people.  As such, the value of any technology cannot be assessed in isolation from human involvement with it.

So when it comes to autonomous cars, will people merely be “along for the ride,” blissfully isolated from the visceral experience of mobility, grateful to be relieved from the humdrum of steering, stopping, and starting?  Or can we expect some secondary consequences?  Let’s take a brief look at some of the things that might unexpectedly occur if Level 5 autonomy ever comes to be...

Are all individual cars expected to possess the sensory logic and control capabilities required to navigate the complex worlds that humans contend with every day, as a simple matter of course?  If not, we can expect that planning authorities will turn their eye toward modifying the environments in which vehicles operate.  This means physical modifications of roadways, signage, etc. as well as new traffic management paradigms, similar to those foretold in the above video (specially designated travel lanes, etc.).

Infrastructure re-configuration is, of course, a leviathan when compared to vehicle manufacturing, in terms of scale, speed, and cost.  The implications should be obvious.  If you follow our News and Blog posts, you'll recall that we spoke to this topic at the 2017 Autonomous Vehicle Test & Development Symposium.

It's imagined that some 70 billion hours of drive time will be freed up by Level 3 -5 driverless cars due to pilot task unloading, wherein drivers will transform themselves into 'mobile office operatives.'  In parallel, some predict a compression/containment of urban centers, since individual commute times will be reduced as a result of the traffic flow improvements that will surely follow the introduction of autonomous vehicles.

However, those contemplating the human-plus-technology aspects argue that people will not necessarily convert their driverless time into work time, 1:1. They also point out that people tend to assess their daily commutes based on time rather than distance.  This means that those who have already become accustomed to long-duration daily commutes will make use of autonomous vehicle technology by moving further away  from their place of work, such that cities will bulge out beyond their existing motorways/loops.

Autonomous car content and performance will be dominated by software rather than hardware.  [For reference: A typical new car has about 30,000 parts, down to the smallest screw.  Driverless cars may require one billion lines of code to operate.]  This will certainly change the nature of cars themselves – including how they are designed and developed.  It will also change how cars are integrated into the wild.  The economics are arduous, but there is no doubt that the introduction of autonomous cars will encourage money to move around differently than it does today.  Will the need for continuous software updates force car ownership to become a thing of the past, to be replaced by (perpetual) leasing?  Who will truly bear the liability cost for vehicles piloted by AI?  Without human drivers what becomes of the Teamsters?

Within the auto industry, at the micro level, validation of sensor-based ECU functions will require all-new development tools that mix simulation environments with real sensor hardware and human involvement.  At the macro level, the qualification of complex, intertwined software and hardware systems must comply with regulatory compliance and safety standards such as ISO 26262, wherein auto manufacturers must perform detailed safety analyses to determine the applicable levels of Automotive Safety Integrity Levels (ASIL) for various features and functions.  Establishing standards-based compliance will not come cheap, and the auto industry will be required to adjust its internal clockworks to make it happen.

Ethically speaking, traveling by car is safer than it’s ever been.  For example, motor vehicle fatalities in the United States since the 1920s, when viewed per vehicle miles traveled (VMT), are asymptotically approaching zero.  These historical improvements in vehicle safety can largely be attributed to hardware (crash-worthiness, etc.) improvements.  However, the same data that leads to ethical acceptance, over the same time period, reveals that the number of motor vehicle fatalities in the U.S., on average, exceeds the total number of fatalities from 9/11… every month.  This may well be an affront to morality (when viewed from an individual perspective rather than a societal perspective).

Since the goal is a continuous reduction of car-related injuries and fatalities, it’s no wonder that non-hardware technologies (ADAS, driver-less controls, etc.) are being aggressively explored. It is also recognized that it's both ethically and morally difficult to justify any  number of injuries or fatalities resulting from AI logic – since 'robot killers' are not currently in vogue – and that some decision-making may never be code-able.  Luckily, some AV assessment entities are looking directly at the question of how to develop safe, ethical, and efficient development protocols for the verification of autonomous cars.

It may be that the cars of today are already as autonomous as they will ever be.  You can climb in, start the engine, and then drive off to any destination in any manner you choose.  What’s more autonomous than that?  Since such scenarios will simply not be the case with Level 4 - 5 autonomous cars, we must assume there is a desirable trade-off for surrendering this independence of mobility.

Are we trading for improved safety?  This doesn’t seem likely.  There have been multiple, cited studies that describe methods to significantly reduce roadway injuries and fatalities that can be implemented with current technologies.  Are we trading for overall reductions in fuel consumption?  This doesn’t seem likely either.  The jury is decidedly out on whether electric vehicles (required for Level 4 - 5 autonomous implementation) will reduce total fuel consumption or simply offset it.  Are automakers obliging market demands?   Well…no.  Everyday people are not clamoring for autonomous cars, pressuring automakers to deliver or else.  So, again, we are left to wonder: What’s all the fuss about?

To Err is Human

One thing seems certain, as stated earlier: Technology cannot really be assessed in isolation from human involvement with it.  People remain at the epicenter of any technological innovations and disturbances, positioned as the ultimate arbiters.

Ansible Motion has been in business for the last decade, providing engineering-class driving simulators that can be used to connect real people with emerging automotive technologies.  Yes, it’s true that this is yet another ‘technology’ to consider – but this one does honestly endeavor to place real people in the mix.  Many of our current customers are using their driving simulators for autonomous, ADAS, and advanced powertrain developments.  Even when faced with all the above changes and uncertainty in automotive space, they remain calmly devoted to building better products.

If you’d like to learn more about how automotive manufacturers use driving simulators as product development tools, download our FREE white paper, “Look Down the Road: Driving Simulator Technology & How Automotive Manufacturers will Benefit."