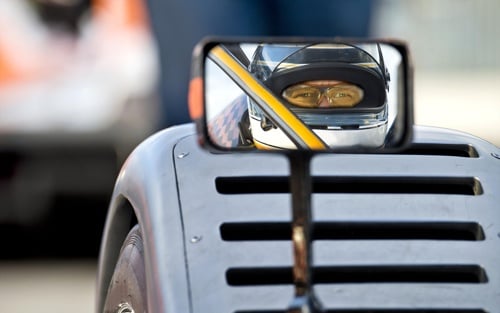 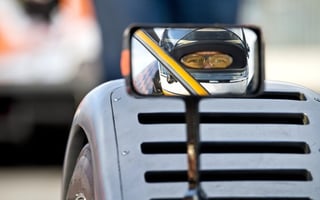 For an experienced  driver, one might argue that any driving simulator or game is, at best, a pale representation of the real thing.  After all, how can a simulator possibly deliver anything resembling the visceral experience of driving a real car?  Well, maybe it can’t.  But perhaps it can deliver something else.  Perhaps it can deliver an opportunity for a driver to interact with a realistic (modeled) car in a realistic (modeled) environment.  This may or may not be entirely convincing or appealing to a driver. But it is certainly appealing to vehicle designers and engineers who wish to explore the boundaries and depths of performance.

There is no question that an experienced driver can have a compelling experience in a driving simulator.  Marcos Ambrose (NASCAR) describes having been so immersed inside a DIL simulator lab that he instinctively put his hand outside the window to channel some cooling air, just as he would do in a real car.  Alternately, many top drivers describe being frustrated by virtual driving experiences. For example, Lewis Hamilton (F1), has stated publicly that he can learn "the same amount about racing circuits by playing computer games as by driving in [a] simulator."  How can there be such disparity in qualified opinions related to driving simulator technology?

In some cases, it can be related to a driver’s expectations.  For example, if a driver is primarily interested in learning new race tracks or in refining driving lines around known tracks, there may be very little perceived difference between a gaming station and a multi-million-dollar driving simulator.  Both may equally effective in their ability to provide interaction with race track topography.  However, if a driver is interested in working through vehicle tuning changes with race engineers, there will be noticeable performance differences among different driving simulators (vision systems, motion systems, etc.).

A Simulator is not a Simulator

There are many types of driving simulators.  Some are better suited to certain use cases than others. In a previous article, we introduced a map showing "vehicle model detail" versus "driver skill level."  On a map such as this, one can observe that a highly skilled driver can indeed find value from an “entertainment” class simulator.  The primary limitation of this class of simulators is simply its inability to execute and provide feedback from sophisticated vehicle and environment models.  We can also observe that from a vehicle engineering perspective, “human factors” class simulators can accommodate modeling complexity, even though skilled drivers do not typically find them to be very useful.

An emerging class of driving simulators simultaneously addresses the needs of vehicle engineers and skilled drivers.  These newer “vehicle dynamics” class simulators can serve exploration of vehicle performance areas such as handling, drive-ability, and ride – areas that require simultaneous vehicle modeling sophistication and driver feedback, with the end goal being virtual verification and tuning of vehicle systems via objective and subjective means.

A few companies, such as Ford Motor Company, are on the leading edge of implementing vehicle dynamics class DIL simulators, as evidenced in the following video:

As mentioned in the video, some seasoned drivers will still approach this type of simulator with skepticism, wondering if an appropriate level of realism can, in fact, be achieved. Of course, drivers with “simulator experience” will immediately notice the strong visual cues and subsequent “feedback” cues indicating that this is not a traditional driving simulator – that it is something quite different.

If the purpose of DIL simulation is to allow real drivers to close the loop on real-time simulations, then ultimately, assessing the success or failure of that purpose requires developing judgement criteria related to how well real drivers are compelled to (1) behave as if they are inside a real car, and (2) provide subjective feedback that is consistent with a real driving sessions. But to be fully won over on an emotional level, drivers must gain appreciation for a DIL simulator’s vehicle modeling (and virtual tuning) sophistication and in-cabin sensory feedback, and ultimately develop a level of trust and acceptance of the overall virtual driving experience.  After all, seat time in driving a simulator should not be a burden – it should be a perk.

Are you interested in reading more about the leading edge of motorsports simulation? If yes, you can download our free white paper, Boosting Race Track Performance with Simulation.